AMD will soon be revealing its newest Radeon graphics cards, the RX 7000 series, with an unveiling live stream taking place on November 3. We don’t know exactly what GPUs to expect from the event, but rumors have added a new contender to the lineup: an uber-powered flagship called the Radeon RX 7900 XTX.

This new speculation – which originated from Taiwanese tech site Benchlife – overrides previous suggestions that the headlining card would be the RX 7900 XT or 7950 XT. Instead, it looks like AMD might be holding the upgraded ‘50’ variants in reserve for now, potentially so they can arrive in 2023 with AMD’s second-generation 3D V-cache technology.

The new GPUs are based on Team Red’s new RDNA 3 architecture, and it looks as if we’re still getting the expected RX 7900 XT, with the XTX model packing more cores and an extra 4GB of VRAM. ‘XTX’ is an old naming convention of AMD’s, which hasn’t been used since the Radeon X1000 series way back in 2006.

If the leak is to be believed, the RX 7900 XTX will be AMD’s competitor to Nvidia’s stupidly powerful and stupidly expensive RTX 4090, a model that sits high up our list of the best graphics cards. There’s no news on pricing or performance of the new Radeon GPUs yet, so we can only guess as to how it might stack up against Team Green’s offering.

Look, I’m all for AMD producing a rival to the mighty RTX 4090, but let’s be honest here; neither the RX 7900 XTX nor Nvidia’s new flagship card are going to be mainstream consumer products. After all, people are still searching for where to buy the Nvidia GeForce RTX 4090 and even the base pricing is far out of the average PC user’s reach.

I think we’re moving towards a singularity in consumer graphics card requirements. The professional side of the market will always crave more powerful GPUs to render animations and crunch numbers faster, but for the everyday PC gamer in the current cost-of-living crisis there’s no impetus to shell out hundreds if not thousands of dollars for a new card when perfect good affordable options are still out there.

Yes, the RTX 4090 sold out almost immediately, but Nvidia didn’t exactly pull out all the stops when it came to stock production. The most recent Steam Hardware Survey shows that the most popular GPUs among gamers are the GTX 1060, GTX 1650, and RTX 2060 – some of the best cheap graphics cards of the last decade.

This means the majority of gamers – on PC, anyway – are still playing at 1080p or 720p, and in my opinion that’s totally fine. 4K monitors are expensive, and the higher resolution matters less when you’re sitting with your face two feet from the screen. Cheaper cards such as Intel’s Arc GPUs or the long-awaited RTX 4060 are the real deal here; we hope AMD doesn’t ape Nvidia and only show us the pricey high-end cards.

It’s important to remember that all of this is currently just a rumor, and Benchlife did not divulge the source of its leaked information. You can tune into the live stream on November 3 via AMD’s YouTube channel and find out one way or the other. 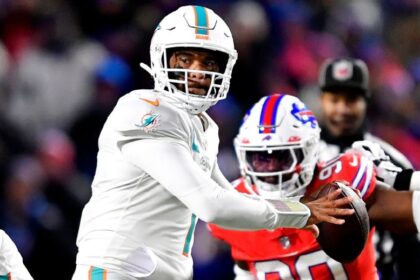 December 18, 2022
Which prevention measures will help keep viruses at bay this Christmas? Our medical analyst explains CNN.com – RSS Channel – HP Hero
Cautious Chiefs prepping as if Mahomes will play www.espn.com – TOP
What does Ronaldo’s signing for Al Nassr mean for Saudi Arabia?
‘He has such a significant presence’: South Koreans sweat on Son’s fitness Football | The Guardian