A collection of malicious Android apps have been discovered hiding in the Google Play Store that don’t just slow down a victim’s device, but also cause high phone bills via annoying malware.

Clicker apps are just as the name would suggest – apps that click things. They work in the device’s background, load ads so that the user doesn’t see them, and then click on them, generating extra revenue for the developers. Depending on the victims’ mobile data plans, these apps could also rake in extra expenses, as well.

Most of the time, though, they will just slow the device down, and drain its battery a bit faster.

The apps are also designed to mimic human behavior, as ad networks became relatively good at stopping bots and do not pay out revenues for automated and bot clicks. Furthermore, they’re also pretty good at hiding from the users, delaying their activities in the first hours after the installation, to make sure users don’t notice any significant drops in performance.

> This Android malware could leave your wallet pretty empty

> These are the best firewalls around

While Google says it has now removed all of the apps from its repository, it can’t delete them from the users’ devices – so until users remove the apps themselves, they will remain at risk.

Anyone suspecting their devices hold such apps should experiment by leaving their smartphones idle for a couple of hours. Should it lose too much battery, or show an increase in mobile data consumption, they should remove potential malicious apps before running the experiment again.

The full list of malicious apps can be found on this link. 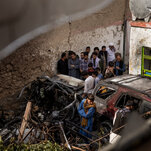 Military Investigation Reveals How the U.S. Botched a Drone Strike in Kabul

January 6, 2023
10 things we learnt from the group stages in the Qatar World Cup Football The Guardian
Flight cancellations top 2,400 nationwide CNN.com – RSS Channel – HP Hero
Micron’s most advanced SSD yet should boost your next business laptop
‘I’d make it more political’: when USA lost to Iran at the World Cup in 1998 Football The Guardian