Most high-end smartphones aim to do broadly the same things – offering tons of power, top-tier screens, and excellent cameras; paired with a sleek design. But the new Saga phone does things a bit differently.

This handset is made by OSOM – a company made up of people who worked on the Essential Phone – and it’s been created for Solana Mobile, which is a cryptocurrency company. That makes for an unusual pedigree, and goes some way to explaining the specs of this phone, which have recently been revealed.

Evidently, there’s no shortage of power here and there’s loads of storage, but the screen is lower resolution than most top flagships (which tend to have QHD+ displays), the camera system is low on lenses, and the battery sounds rather small. Unusually though, it has a microSD card slot, which is a rare sight these days on expensive handsets.

Then there’s the design – the Saga phone has a ceramic back, a stainless-steel frame and titanium accents, which along with its IP68 rating makes for a premium build, yet the bezels above and below the display aren’t small, leaving it looking mid-range at best.

Still, this is a high-end phone with an unusual mix of specs, which on paper seem a bit unbalanced. But then the Saga isn’t really aimed at mainstream audiences, as it also has all sorts of crypto credentials, with web3 features aimed at “defi pros, NFT collectors, and the most demanding crypto enthusiasts.”

So its intended audience likely has different priorities than typical buyers of an iPhone 14 Pro or Samsung Galaxy S22 Plus. Which isn’t to say they wouldn’t appreciate more cameras or a bigger battery, but they might consider this an acceptable compromise to get more specialist features at this price.

Analysis: an odd mix of old and new

The Saga’s microSD card slot and modest battery capacity both make it sound a bit like a phone from the past – while its crypto features and chipset point more towards the future.

But there’s another old-fashioned feature here too – a rear fingerprint sensor. The vast majority of fingerprint sensors on high-end phones now are built into the screen, but the choice to put it on the rear of the Saga phone was probably more than just a cost-cutting measure.

In-screen fingerprint sensors still haven’t been perfected – they’re often slower than more conventional sensors, and can be prone to misreads. So a capacitive fingerprint sensor on the back can in some ways be better.

Plus, this sensor has had some thought put into it, as it supports custom gestures. So – much like a microSD card slot – it’s old-fashioned, but arguably in a good way, and is something many of the best phones could learn from. 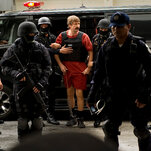 Who Is Viktor Bout, Arms Dealer in Swap for Brittney Griner?

December 8, 2022
Fears and Suspicion Hang Over Voting on Cusp of Election Day
Kari Lake Claims Her Voters Were Disenfranchised. Her Voters Tell a Different Story.
South Korea to test travellers from China amid COVID surge
Highlights from the latest release of January 6 transcripts CNN.com – RSS Channel – US