Steam broke a major milestone in terms of concurrent gamers using the platform at the weekend, exceeding the 30 million mark.

As Tom’s Hardware spotted, the number of gamers simultaneously on Steam reached 30,032,005 on October 23.

Note that there’s a distinction here regarding those active users, as they were not necessarily simultaneously playing games – some of them might have been browsing the store, forums, or any of the other stuff you can get up to on Valve’s platform aside from actually gaming. (8.5 million were in-game, in fact, which falls short of the record on that score – Steam has exceeded 9 million previously).

Whichever way you dice it, though, that’s a lot of people on Steam, and numbers have been growing since the pandemic hit, and more folks started gaming as a result.

Momentum has gathered considerably since the start of 2021 when the record number of concurrent gamers reached 25.4 million, and accelerated to 27.4 million at the end of last year. Then in March 2022 the record got tantalizingly close to 30 million, but fell just a touch short – but now, that milestone has finally fallen.

Analysis: PC gaming is here to stay, ports and all

That kind of progress in terms of active Steam users is certainly a sign that the PC gaming industry remains in good health. It’s welcome news in the face of a lot of doom and gloom lately around the PC market experiencing a slump in sales, and declines with related components too, like system RAM and graphics cards.

And when that old ‘PC gaming is dead’ chestnut emerges periodically, as it inevitably does, the continued upward progress of Steam in this respect certainly paints a different picture to that pessimistic image.

There are plenty of positives for PC gaming right now, like graphics card prices finally starting to normalize to MSRP – or even below. That’s another thing to bear in mind: this forward momentum has been built in a tricky environment for PC gaming, certainly on the GPU front, where things have been overly costly for quite some time.

We also feel that another major plus point for contemporary PC gaming is how many more big console exclusives are now making their way to the platform, with high-quality ports often offering more than the machine they came from.

We’re thinking of PlayStation exclusives in particular which are being ported across such as God of War or Horizon: Zero Dawn, complete with benefits like support for ultra-wide monitors, higher and smoother frame rates (don’t forget DLSS and FSR in that department), and even improvements for the controls (as well as all the givens like mods).

Throw in head-turning innovations such as the Steam Deck, and in a way, it’s hardly a surprise that even with some headwinds for PC gaming, the massed ranks of these gamers continue to swell according to Steam’s stats. 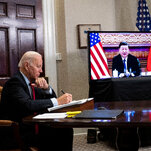 Biden and Xi Will Meet as Tensions Grow Over Taiwan

November 10, 2022
Google approves Trump’s Truth Social for play store
Bodies of 27 migrants, including children, found in Chad desert
It just got a lot easier to find the best custom maps and modes in Halo Infinite
Eleven sentenced to death for killing conservationist in Tanzania