Britain’s leading economic thinktank has warned the government of the dangers of cutting education spending on students in sixth forms and further education colleges, after new analysis showed recent additional investment being all but eroded by inflation and growing student numbers.

As the Treasury attempts to balance the budget, government departments are on standby to identify spending cuts, but the Institute for Fiscal Studies (IFS) said any attempt to reduce spending in the 16-18 sector would “sit uncomfortably” with the government’s stated commitment to focus on skills and economic growth.

Rishi Sunak has had a torrid first 100 days as Britain’s leader. But the Conservatives might not be doomed 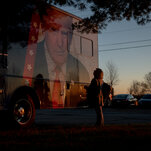 The World’s Democracies Ask: Why Can’t America Fix Itself?

November 8, 2022
You Didn’t Make It to St. Louis, but Your Bags Did. Here’s What to Do.
World of Warcraft devs say it ‘needs to do better’, announcing new quests and more
Iran rockets hit Kurdish party HQ near Iraq’s Erbil, kill one
Taxpayer’s Bulb bill to hit £4bn as Octopus Energy closes in on takeover