This year, the cost of everything from food to fuel to travel has been skyrocketing up, up, and up. You can now add prices for your Apple Music and Apple TV+ subscriptions to that list.

The price hikes also extend to the company’s Apple One plans, which bundle a number of services together. These have increased as follows:

This is the first time Apple has raised prices for these subscription services in the US and, according to the company, the hikes are mostly due to increased licensing costs for Apple Music and an expansion of the catalogue of available shows and movies on Apple TV+ since the service first launched back in 2019.

An Apple spokesperson provided the following statement to TechRadar:

“The subscription prices for Apple Music, Apple TV+, and Apple One will increase beginning today. The change to Apple Music is due to an increase in licensing costs, and in turn, artists and songwriters will earn more for the streaming of their music. We also continue to add innovative features that make Apple Music the world’s best listening experience. We introduced Apple TV+ at a very low price because we started with just a few shows and movies. Three years later, Apple TV+ is home to an extensive selection of award-winning and broadly acclaimed series, feature films, documentaries, and kids and family entertainment from the world’s most creative storytellers.”

Analysis: Are Apple’s now more expensive services still worth it?

Apple Music has ranked high among the best music streaming services for its incredible value. It has long offered both lossless and high-res music for the same $9.99 / £10.99 price, along with a large selection of albums and tracks in Spatial Audio. Compare that to market leader Spotify, which currently only streams music in a lossy, compressed format (although the company is said to finally be nearing launch of a Platinum high-res tier with a $19.99 per month price tag, or twice the cost of its current ad-free Premium plan).

Even with the price boost to $10.99 / £10.99, Apple Music still is a great value when compared to services like Tidal that also offer both lossless and high-res music streaming, but for $19.99/£19.99 per month. Following the price boost, Apple Music’s closest competitor offering lossless and high-res streaming, along with Dolby Atmos music tracks, will be Amazon Music HD ($9.99 / £9.99 per month), though that service lacks Apple Music’s elegant interface and well-organized Atmos music library.

As for Apple TV+, the same as with Apple Music and lossless/high-res, your base subscription tier gets you support for 4K and Dolby Vision HDR – there is no high-quality tier that you need to pay extra for. Compare that to Netflix, which makes you pay twice as much for those features when you upgrade from its $9.99 / £9.99 per month Basic plan (which currently doesn’t even provide HD streaming, though that will change in November when the company’s Basic with Ads plan drops).

A price hike for Apple TV+ actually seems overdue: while its offerings were extremely limited in the beginning, it now has plenty of high-quality original shows like Severance and Ted Lasso, along with a strong selection of documentaries and movies.

If you’re an Apple One subscriber, the hikes are even less painful. I currently have a Premier Apple One subscription, which gives me family access to the following Apple services: TV+, Music, Arcade, Fitness+, and News+. All of those get used on an almost daily basis, and when you consider that it also comes with 2TB of iCloud storage for photos and other files, it’s still a great bargain even if it now costs $3 per month more.

While I hate to part with more money on a monthly basis for anything, I can’t say that these Apple service price hikes are outrageous, especially for the high-value Apple One plans. It may not help the company to pile on new subscribers to Apple Music or Apple TV+, but I suspect that most current ones aren’t likely to cancel. I know I’m not.

Microsoft Defender is getting much better at protecting Linux endpoints 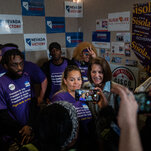 November 3, 2022
Warnock Claims Momentum in Georgia, as Walker Banks on Election Day Turnout
Ben White is thriving for Arsenal. Should he go to the World Cup? Football | The Guardian
Colombia’s signing of Escazu accord brings hope to land defenders
Behind New York City’s Shift on Mental Health, a Solitary Quest