The sudden announcement of Google Stadia’s death may have been a shock, but it certainly wasn’t a surprise.

Since its 2018 launch, Google Stadia struggled to find a large audience, which was only made worse by Xbox Cloud Gaming and Nvidia GeForce Now dominating the space.

Whether it was the business model that killed it, or a general lack of interest, Stadia’s death was arguably on the cards long before it had a chance to make a name for itself.

Google Stadia may have been the problem child in the cloud gaming litter, then, but it wasn’t totally devoid of good qualities. I loved its updated party chat system, built-in YouTube Gaming live streaming, and overall user experience (including menu navigation and low latency) was great. But most of all, Stadia had a controller that should’ve made other manufacturers envious.

It’s a wonderfully comfy controller just to hold. Its buttons and sticks are high quality to the touch. And I love the robust collection of shortcut buttons at the center of the pad that let you easily capture screenshots, access Google Assistant for voice-based navigation, and more.

Google clearly poured a lot of resources into researching and developing a controller for Stadia. It’s all effort that now, sadly, may have been wasted. Google is already in the process of delisting Stadia hardware like its controller and offering refunds to those who own one.

After Stadia’s cutoff date of January 18, 2023, the pad will no longer be able to connect to your PC wirelessly. You should still be able to use it as a generic controller via a wired USB-C connection, but if you want to go wireless, you’re plum out of luck.

Google is offering refunds for the controller, which is more than you might expect from a company that’s winding down a service, but it would be a crying shame if the tech ended up in a landfill somewhere when it could live on as an excellent third-party controller. 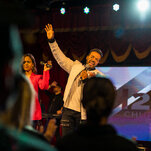