Google Chrome extensions are set to see another year of support for enterprise use following the company’s decision to postpone their deletion from the Chrome Web Store until January 2024.

The announcement on the Google Chrome Developers blog offers a stay of execution for sweeping changes to the Chromium engine that privacy advocates say will neuter web browser extensions designed to block advertisements.

But no such reprieve is being offered to personal Chrome users, who Google say will be subject to extensions built on the existing Manifest V2 (MV2) API being temporarily phased out in a series of “experiments” next year.

Though the new enterprise policy will give businesses more time with extensions critical to their workflow, Google Chrome extension developers have less time to adapt to the browser’s adoption of the Manifest V3 (MV3) API.

From January 2023, Google says that it will no longer highlight MV2 extensions on the Chrome Web Store, as it looks to “raise the security bar” on the platform.

Then from June 2023, MV2 extensions will no longer be able to be published with their visibility set to public. Extensions already public on the store will become “Unlisted”. This is an especially egregious change, as it means they’ll be undiscoverable to new users, while still being functional for enterprises.

Google is also warning developers that their MV2 extensions may still stop working at “any time” following the release of new Chrome versions next year.

January 2022 will also see Chrome 112  allow a gradual phase-out of Manifest V2 in Canary, Dev, and Beta versions of the browser. While in June, Chrome 115 will allow this phasing out of MV2 to occur in Stable versions of Chrome – the version with the largest consumer user base.

Central to the controversy is WebRequest, an API critical to blocking web content such as advertisements, and which Chrome’s implementation of MV3 will remove.

> Check out our list of the best endpoint protection right now

> Some Google Chrome ad blockers could stop working next year

> The most popular Firefox extensions of 2021 were both adblockers

In the wake of the changes, the developers behind Mozilla Firefox have announced their intention to retain WebRequest in their implementation of MV3.

“Content blocking is one of the most important use cases for extensions, and we are committed to ensuring that Firefox users have access to the best privacy tools available,” Mozilla said.

Here’s a list of the best VPN services right now

Realme GT 3: what we want to see 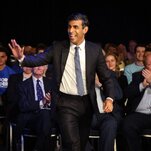 Race for U.K. Prime Minister Heats Up as Nominations Roll In

October 23, 2022
Microsoft warns businesses to up their security game against these top threats
World Cup 2022, Day 5: The schedule, key players, what to expect
Ravens TE Andrews ruled out for MNF vs. Saints www.espn.com – TOP
Spanish football fan walking to Qatar ‘arrested in Iran’