Nvidia’s RTX 3090 and 3090 Ti graphics cards, plus the 3080 Ti, have fallen to new lows in terms of their respective asking prices over in the US.

As Wccftech spotted, the flagship RTX 3090 Ti actually hit $1,100 for an EVGA model at Newegg, although unfortunately that has now sold out. However, at the time of writing there is still an RTX 3090 Ti Ultra Gaming graphics card from EVGA (with a faster boost speed than the base model) available at Newegg for $1,150, which is $50 cheaper than the recent low we saw for this GPU (when sold direct by the manufacturer itself).

As for the RTX 3090, the same Ultra Gaming version of that graphics card from EVGA has been cut to $960 (again, this is in stock, at least as we write this).

Chunky price cuts are being implemented in other regions, too, and for example in the UK you can now pick up an RTX 3080 Ti for £849. As Wccftech further observes, in China some of Nvidia’s high-end Ampere models have price tags which are around 35% to 45% below MSRP, and even further down the RTX 3000 range there’s 10% to 15% being shaved off recommended prices.

It seems clear enough that asking prices are hitting fresh lows – certainly in the case of the 3080 Ti and Ampere GPUs above that – but before you rush to add a product to your cart, you might want to bear in mind that even deeper discounts are thought to be on the horizon.

This prediction comes courtesy of the Taiwan Economic Daily, which foresees price cutting action that will “far exceed” the movement we’ve witnessed last month, and indeed this latest batch of price drops is certainly in line with that forecast. Note that AMD pricing is said to be dropping, too, and there’s already evidence of this as well, with the likes of the RX 6900 XT now down to $700 in the US, and some 40% below its MSRP in China.

With bigger falls to come, we can envisage the RTX 3090 Ti dropping below the thousand buck mark, and there’s the further prospect of some seriously good value deals on RTX 3080 models, meaning that being patient could pay off handsomely. Although bear in mind that these deals will only become so tempting because they need to be, before more powerful RTX 4000 models arrive in town – and RDNA 3 GPUs for AMD, too, of course. However, Nvidia in particular needs to shift that current-gen stock with some speed, as we’ve been hearing on a regular basis of late.

These are the secrets of the Samsung Galaxy Fold, and the future of that crease 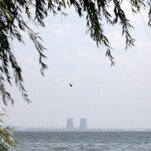 admin August 27, 2022
Photos: Flood-hit Pakistan now fights waterborne diseases
The UK is at a perilous tipping point. But what is Truss planning to do about it? | Polly Toynbee
Damage to bridges across the Dnipro River means that Russian forces are unable to cross to assist units on the front lines
‘Reality One’ might be Apple’s AR headgear moniker