Eve is adopting Matter and Thread for a wide collection of its smart home devices, unveiling a new collection and the technology update at IFA 2022 in Berlin.

The idea is that when you go shopping for a new smart light switch, camera, or doorbell, you won’t have to check if they all, say, work with Apple’s Home Kit or Amazon’s Alexa, and instead look for Matter support.

Up until now, though, products supporting Matter and its mesh communication backbone, Thread, have been in short supply. If Eve is any measure, though, that’s about to change.

The company announced and is demonstrating a collection of new and updated products that will initially support Thread, which replaces Bluetooth interconnectivity with a Wi-Fi-based network. Eve’s existing Apple-enabled lineup, which includes Eve light strips, is due for a firmware update this year that will bring support for platforms from Amazon, Google, and Samsung.

Matter, however, will also get a chance to flex its interoperability muscles in a new Eve product lineup that includes new Eve MotionBlinds built in partnership with Coulisse. The blinds will, according to Eve, will be the first smart blinds to support Thread and, later, Matter.

The MotionBlinds will come in HoneyComb and Roller styles. The former will only be available in Europe and the Rollers will be sold globally. Since these systems are sold through resellers, pricing was not available.

They’ll work with a new Eve Shutter Switch that will also add smart functionality to existing motorized window coverings. The switch arrives in December for €99.95 (around $100 / £86 / AU$146) and will be sold through Eve and Amazon in Germany, Austria, Belgium, Luxemburg, and the Netherlands.

Eve’s third-generation Lightswitch, which can add smart functionality to any light, is also getting the Thread and, later, Matter update. As a Thread-based device, the switch can also act as a router node for other Matter devices. It’ll be available in North America starting in October for $49.95 (around £43 / AU$73).

Apple fans will have a head start on all this Thread and Matter excitement. Eve started with exclusive support for Apple HomeKit and, with Matter, is only now adding support for other third-party platforms. As such, an Android Eve app is coming later this year.

Analysis: A Matter of season

It’s likely that Eve’s Matter announcement is just the start of some significant momentum for the new smart home standard. Eve appears to have gotten a head start on adoption by quickly building in and updating existing devices for the crucial Thread network protocol. However, expect other smart home manufacturers to quickly follow suit.

It’s rare for any technology to have such widespread support across typical competitors like Apple, Google and Amazon, which often like to choose their own communication platforms or gravitate to less widely-adopted ones like Zigbee.

CES 2023 should be stuffed with Thread and Matter-supporting products, launching a smart home interoperability revolution the likes of which we’ve never seen.

The other benefit of Eve getting ahead of the game is that these products might be in the public’s hands before the end of this year, which means consumers will be using them in real-world scenarios. It’ll be a crucial test for Matter. If all goes smoothly, 2023 will likely be the breakout year for Matter-supporting devices from Apple, Google, Samsung, Amazon and all their supporting smart home device brand partners.

IFA 2022 is Europe’s biggest tech show, and TechRadar is in Berlin to bring you all the breaking news and announcements, plus our hands-on first impressions of the new TVs, wearables, audio devices, and other gadgets on show. 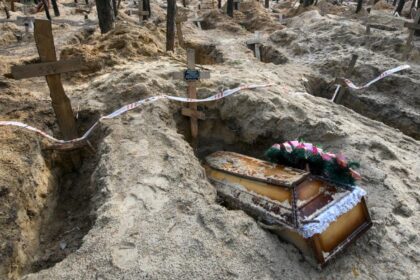 October 8, 2022
How will the 2022 FIFA World Cup change Qatar and the region?
Ashland Was Set to Be a Food Paradise. Then Came the Almeda Fire.
Asian stocks slide on fears of sharp rate hikes in US, Europe
Akshata Murty: Rishi Sunak’s wife is a software heiress who’s richer than royalty