Klopp: ‘I enjoyed win but we should have played more’
Newcastle’s Eddie Howe denies gamesmanship by his side

Jürgen Klopp described Liverpool’s 98th‑minute winner against Newcastle as “the perfect response” to the time-wasting at Anfield after Fabio Carvalho’s late strike sparked a furious confrontation between the opposition benches.

Liverpool overturned Alexander Isak’s debut goal for Newcastle through Roberto Firmino and the substitute Carvalho, who scored in the third minute of time added on to five minutes of stoppage time. The additional time was added after treatment to the Newcastle goalkeeper Nick Pope and time-wasting by Joelinton, leaving Klopp to rejoice in the timing of a dramatic victory. 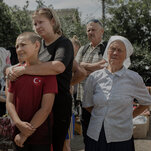 admin August 27, 2022
UN calls for Libya ceasefire after deadly clashes
The pilot who threatened to crash the stolen plane into a Walmart in Tupelo is in custody, source says
Daniel Radcliffe gets weird in this new trailer for ‘Weird: The Al Yankovic Story’
Ana de Armas thinks ‘Blonde’s’ NC-17 rating is a bit much