Intel’s Arc graphics cards are here to stay, and the chip giant has no intention of giving up on progressing with discrete (standalone, rather than integrated) GPUs as some chatter on the grapevine has theorized recently. In fact, work has already begun in earnest on Battlemage, the second-gen for Arc graphics cards.

This news comes from an interview PC Gamer conducted with Intel’s Tom Petersen, a Fellow on the GPU team who explained in very clear terms that the company remains fully dedicated to the Arc range, including gaming graphics cards.

He then repeats to underline the point: “I feel like there’s a lot of FUD (fear, uncertainty, and doubt) out there. I’d just like to be clear: we’re not going anywhere.”

And to back those assertions up, the Intel Fellow notes that the development of next-gen Arc GPUs is well underway. As you doubtless know, the current first-gen crop of graphics cards are Arc Alchemist models, and Battlemage will be the second-gen outing, with most Arc graphics engineers working on making these GPUs already. Indeed, some engineers – a “small portion” – are looking at early development for the third-generation, which is Celestial (it goes A, B, C, and fourth-gen will be D for Druid).

That leaves just a “very small portion” of folks still working on Arc Alchemist, nailing all the fine-tuning, such as the final board configuration, BIOS and driver work. Peterson observes that the “bulk of our design team is on Battlemage” at this point.

Analysis: Battlemage to the rescue?

Of course, the fact that Intel is carrying out development work on future generations of GPUs right now is no cast-iron guarantee that those products will be realized. And the purported losses Intel has suffered (beyond the official costing, which was hefty enough) is worryingly eye-opening, to say the least.

Still, it’s a good sign to hear Intel putting down a concrete commitment to developing the next generation of standalone GPUs for the Arc family – and even if the more cynical could speculate about damage control at this stage of doom and gloom from the rumor mill, things are still clearly alive and kicking at Team Blue.

Battlemage, if you recall, is slated to be launched during 2023 or 2024, and during the interview, Intel indicated that the delays we’ve seen in the rolling out of Alchemist graphics cards won’t affect the planned delivery of Battlemage.

Naturally, the looseness of the mentioned timeframe provides a fair bit of room to maneuver, anyhow, and the second-generation will be a lot easier in terms of being able to build on the drivers of the first-gen Alchemist GPUs. Getting it all down from scratch on the software side is obviously quite a bit more work than a second iteration of the Arc product range.

The next step for Arc Alchemist, following the release of the budget-oriented A380 – which has only just gone on sale in the US very recently – are the higher-end offerings like the Arc A770 and A750. While those GPUs are not going to blow away AMD or Nvidia’s top dogs – or even get remotely close to them – they could be effective mid-range challengers if the price is pitched right. And we’d imagine tempting pricing is one of the final cards Intel has left to play here, given the overall wonkiness of its Arc discrete GPU launch thus far. 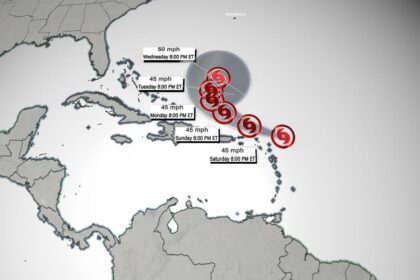 Another named storm joins Hurricane Danielle in the Atlantic

September 3, 2022
Somalia and al-Shabab: The struggle to defeat the militants
The Flaw in Biden’s Pro-Labor Record: Uber Drivers Are Still Waiting for Help
Criminals stole over $1bn in cryptocurrency in just three months this year
‘Welcome to Wrexham’ gets an assist from Ryan Reynolds but still doesn’t score