Philips TVs has unveiled its latest high-end OLED TVs at a Berlin event running parallel to IFA 2022, and I had the chance go hands on with the right away, and they’re a very interesting pair.

They’re the Philips OLED+907 and Philips OLED+937, and they’re very much like a little sibling and a big sibling both battling for a place in our list of the best OLED TVs.

What they have in common is that they’re both based on LG Display’s highest-end OLED EX panel – which is known as the ‘Royal’ panel, and is capable of up to 30% higher brightness than previous OLED tech. It’s what LG uses in the LG G2 – and they both feature a built-in speaker array from Bowers & Wilkins to avoid the need for a separate soundbar.

They also both use a customized version of Android TV 11, and they include a new version of Philips’ excellent Ambilight tech, which is a subtle upgrade, but brings light that’s slightly more vivid and matching what’s on-screen a little more precisely.

But there are key differences: the OLED+907 comes in 48, 55 and 65-inch sizes, features Philips 6th-gen P5 processor, and its speaker configuration is a 3.1 setup.

And when it comes to contrast, they’re seriously impressive – especially the OLED+937. Obviously, contrast is OLED’s specialty anyway, but through a combination of a very bright panel (by OLED’s standards) and some very advanced HDR processing in the 937, they offer truly dazzling dynamic range.

This is the Philips OLED+937, which its more elaborate speaker system. (Image credit: Future)

I’m told that the panel is capable of reaching 1,300 nits, though in a small 3% window in the most vivid mode – though I wasn’t able to measure that myself. Still, other OLED TVs struggle to hit 1,000 nits, while Philips showed us data that these TVs can maintain 1,300-nit peaks for 10 minutes without any image retention, thanks to their heat sink in the panel.

In the OLED+937, a new Advanced HDR processing feature also means that the brightness levels of HDR video are assessed by the TV on the fly for every individual frame, and different tone mapping efforts are applied to each frame as needed. This means that super-bright images and darker images are treated totally differently, rather than one size fitting all. It’s very clever, and could really help some non-Dolby Vision content.

The result of all this (plus a next-gen image sharpening engine in the 937) is that dramatic, yet realistic, contrast I mentioned above.

In the comparison against the LG, Sony and Samsung, the Philips TV delivered images that were often clearer than the others because the dynamic range appeared to be better – with more detail in the shadows and highlights, you could literally see more of what was going on.

However, I should note here that all TVs were using their Vivid mode or equivalent (Philips’ is now called Crystal Clear), and that means it wasn’t really an even comparison. Despite the fact that some of them come set to this out of the box, it doesn’t always show their dynamic range at its most realistic, so we certainly won’t be declaring the Philips to be a winner of picture quality from that comparison. But it was still striking.

Powerful speakers all around

And then there’s the speakers. The 3.1 system in the OLED+907 includes 10 drivers in total, with 80W of power, so it really packs a punch. The scale and forwardness of the sound is a huge step beyond what any regular TV is capable of, and the rear-mounted bass driver packs some real grunt.

And it’s all hidden in a relatively slim strip of fabric along the bottom of the set.

In the OLED+937, you’ve got a speaker enclosure that’s part of the stand itself, and looks very much like a dedicated soundbar. Here, you’ve got three forward channels, two angled drivers for left and right sound, and two upfiring drivers for Dolby Atmos.

This also provides a really spacious sound, and works really nicely with movies as well as music.

The room I heard them in was mostly plywood, so I’m withholding any full judgment on their potential until we can review them in a real living space, but when it comes to adding detail, drive and open-feeling sound, they’re definitely pushing in the right direction compared to the meagre drivers found in something like the LG C2. We’ll find out if they’re among the best TVs for sound when we can test them properly.

In the meantime, if you want an all-in-one home theatre option, they should definitely be on your radar. Well, they should if you’re in the UK and Europe – sadly, Philips’ OLED TVs still aren’t available in the US, and these won’t be any different.

Bing and ChatGPT might be the future of search, even if Google doesn’t believe it 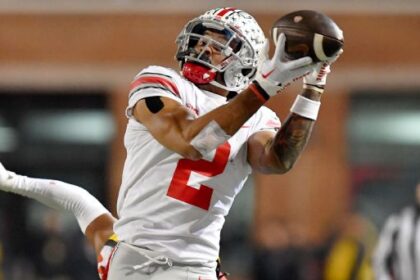