AMD’s incoming Ryzen 5 7600X has already been seen in benchmarks ahead of the CPU’s release in just under a month, and it looks to be shaping up very nicely.

In fact, there have been multiple sightings of the 7600X, which is a mid-range offering for Zen 4 loaded with six cores due to arrive on September 27, and some of these were picked up by VideoCardz.

In another benchmark we saw on Twitter, highlighted by @harukaze5719, the 7600X is shown recording a result of 2,165 and 11,432. So there appears to be some consistency with these pre-release leaks, pointing to single-core performance of around 2,140 on average, and multi-core of 11,380 or so.

This also matches up with what AMD said in its launch presentation, namely that the 7600X would be capable of around 2,175 for single-core.

In comparison to the processor that it succeeds, the 5600X, AMD’s new 7600X is about 35% faster for single-core and almost 40% quicker for multi-core, going by average Geekbench scores for the outgoing Zen 3 chip.

That’s a pretty impressive generational performance leap, of course, and the Twitter benchmark showing the single-core result of 2,165 also cites an Intel Core i9-12900KS score of 2,182 for comparison, indicating that the new Zen 4 mid-range performer is very close on the heels of Intel’s current flagship. At least for this one metric – and we do have to be careful about reading too much into results from a single benchmark suite, as ever.

We’ll need a much more thorough range of testing to determine the true power of the 7600X, and what many of us really want to see is actual gaming benchmarks (as opposed to synthetic non-gaming tests). Mind you, AMD has already told us that on average, the Ryzen 5 7600X is around 5% faster than the Core i9-12900K, with the caveat that this is for gaming at 1080p – and of course we need to take any marketing blurb with a degree of caution.

Still, these leaked benchmarks would appear to be a good indication that the bluster of AMD’s launch is looking like it will be backed up when we actually get these processors in for review to put them through their paces properly.

Another interesting point here is that the 7600X is shown boosting to 5395MHz in these benchmarks, which is actually higher than the processor’s officially rated maximum boost of 5.3GHz.

As we’ve explained before, though, AMD will quote a top boost speed for the official spec which every Ryzen CPU of that model is absolutely sure to hit, but in everyday operation, users may see slightly higher clock speeds than that, likely for just brief peaks. (How high or lengthy those peaks might be depends on how lucky you get with the CPU which you purchase, as all have slight variances in terms of performance).

This is why even though the flagship Ryzen 9 7950X is rated at a boost of 5.7GHz, it has been spotted running faster than 5.8GHz in another recent leak. With the Raptor Lake flagship (13900K) supposedly set to boost to 5.8GHz also, the battle of the clock speeds looks like it’s going to be very close indeed for next-gen chips – though performance depends on far more than this frequency, of course. 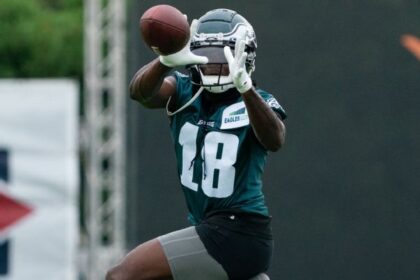 August 31, 2022
Tracking NFL cuts: Who’s in, who’s out as teams trim down to 53-man rosters www.espn.com – TOP
Wolves claim first league win after Podence strikes against Southampton Football | The Guardian
A named tropical system is likely by Labor Day. Here’s how it could affect weekend plans
DeSantis Suspends 4 Elected School Board Members After Report on Parkland