The developers of sci-fi FPS Prey weren’t happy with the game’s name, and the decision to tie it into the Prey IP partly fuelled its creative director’s departure from the studio he founded.

Released in 2017, Prey shares its name with a little-known 2006 FPS developed by Human Head Studios. Despite sharing few similarities with that game, it was billed as a reimagining of the Prey intellectual property, which was held by publisher Bethesda. But creative director and Arkane founder Raphaël Colantonio said the name was forced on the team, who didn’t like it.

“I was a little at odds with some of the management with the decision of calling Prey ‘Prey’,” said Colantonio, speaking to the Academy of Interactive Arts & Sciences. “That was very, very hurtful to me. I did not want to call this game Prey, and I had to say I wanted to anyway in front of journalists.

“I hate to lie, and those are sales lies – it’s not a personal lie – but it still felt bad. I had to support a message I did not want. Not only me, but nobody in the team wanted to call this game Prey. Our game had nothing to do with Prey, but it was kind of like Prey [2006] in a way.

“I’m grateful that a company will give me the means to make a game and trust my ability with so many millions of dollars. But there is a bit of the artist, the creative side, that is insulted when you tell this artist ‘Your game is going to be called Prey’. You go like, ‘I don’t think it should. I think it’s a mistake’.”

Colantonio highlighted the naming dispute as typical of the “corporate world” of game development. Not only a creative oversight, Prey’s name was a commercial blunder, he says. it failed to stir excitement among potential players, as well as souring the way fans of the 2006 game might perceive the newer title.

“It was also a kick in the face to the original makers of Prey,” Colantonio said. “I wanted to apologize to them many, many times. It never was our intention to ‘steal their IP’ and make it ours. It’s gross. That’s not what I wanted to do. So everybody lost, and [Prey’s] sales were horrible.

“I hate to be right in this case, but I was right in 10 different ways that this name should never have been the name of the game.”

Colantonio said the dispute partially contributed to his leaving Arkane shortly after Prey’s release. “I was like, ‘I’ve gotta go at this point’,” he said. “Because I’m not in control of my own boat.”

Speaking in a Noclip documentary last year, Colantonio said Arkane was already working on a sci-fi immersive sim set aboard a space station before the Prey IP was thrown into the mix. That preliminary design was inspired by the studio’s first release, Arx Fatalis, and like the final game drew on Metroidvania-style gameplay.

“None of these ideas were somehow something that Bethesda wanted, but they wanted us to work on Prey,” said Colantonio. “So that’s how everything started.

“Eventually we agreed on something like: ‘As long as [we] can do almost a different IP, but with the same fact that it’s on the space station with aliens’. I guess that was the compromise because anything else was non-negotiable. That game had to be Prey somehow.”

In the same interview, designer Ricardo Bare said the game had no working title before being called Prey. In its early days, it was internally called Project Danielle. That was a homage to SHODAN – the AI from System Shock 2, Irrational Games’ 1999 title from which Prey draws much of its inspiration. 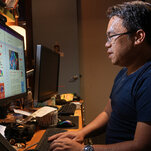 Misinformation Swirls in Non-English Languages Ahead of Midterms

October 12, 2022
Will Ferrell and Ryan Reynolds try their hands (and feet) at musical comedy in ‘Spirited’
Why some cars from the 1990s are soaring in value CNN.com – RSS Channel – US
Exxon and Chevron Rack Up Giant Profits
Gmail could finally be coming to your Android smartwatch