By Adam White for Get French Football News

Franck Haise welled up. The Lens manager was being interviewed on the touchline after his team had won a game last season when Thierry Henry, who was working as a TV pundit, broke into a glowing review of Haise’s “contagious and impressive” team. Haise, who had been completely unknown to most fans just two years earlier, struggled to contain his happiness when hearing a French football legend enthuse about his dynamic side. He is doing something special at Lens. When Haise took over two years ago, they were in Ligue 2. Now his players are breathing rarefied air at the top of Ligue 1. And this is his first senior management role.

Four games into the season, Lens sit alongside PSG and Marseille at the top of the table with 10 points each. Lens thrashed Monaco 4-1 last weekend before easing past the usually free-flowing Rennes – who finished fourth in Ligue 1 last season – on Saturday. Even though Lens have done brilliantly and finished seventh in their last two seasons, their form this season is still something of a surprise.

Donate This Holiday Season: Children and Families Need Your Help

How ‘Black Panther’ Builds Complex Characters From the Politics of Colonization 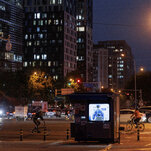 In China, Living Not ‘With Covid,’ but With ‘Zero Covid’