Mike Tyson’s story hardly suffers from a lack of media exposure, so an effort to create a new limited series around the former heavyweight champ entered the ring facing a high bar. Despite a knockout performance by Trevante Rhodes, “Mike” doesn’t consistently clear it, offering an episodic, occasionally too-irreverent tone in seeking to portray not just the boxer but those who passed through his orbit.

‘The Walking Dead’ finally comes to an end, after biting off more than it could chew 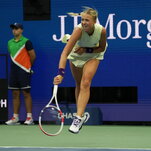 It Was Anett Kontaveit Against Serena Williams, and the Crowd